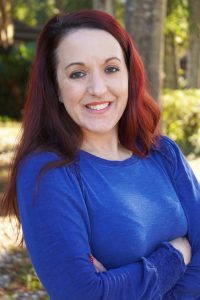 Colleen Marie Pacheco is the Agency Principal of Secured Insurance group. Colleen is an enthusiastic client-services professional who has worked in the insurance industry for the past two decades. Secured Insurance Group, which is led by Colleen, offers insurance seekers throughout the state of Florida business, life, home and auto insurance policies.

Colleen was born in Rochester, New York and moved to Florida when she was 8-years-old. Colleen graduated from Lake Brantley High School in 1997 and later attended Valencia and Seminole Community College. She then transferred to a career training Institute in Orlando, Florida and graduated in 1999 with a technical certificate in Medical Assisting, LPN/CNA/HHA. Upon graduating Collen went to work in the healthcare industry for a short period of time before quickly realizing as much as she enjoyed helping people, she did not enjoy the blood and bodily fluids that came with the job.

Colleen’s parents owned an insurance agency from the time she was in high school. Here she used to work part-time filing and taking messages whenever they were out of the office. After the birth of her son Chris, Collen went back to their agency to help part-time. This is where Colleen’s career in insurance first began.

After her husband received a promotion in 2000, Colleen and her family moved to Jacksonville, Florida where she decided to finally take the plunge full-time into the insurance industry. At age 22, Colleen took a job at Zurich Insurance Services as a Licensing Specialist. This was when Colleen decided to pursue getting licensed in insurance to grow as an industry professional.

Colleen went back to working for her parents’ insurance agency after moving back to Orlando in 2002, Florida Insurance Planners, where she helped by entering clients into their new digital system. While taking on this task, Colleen took the opportunity to obtain her adjuster and customer service agent licenses, which she kept until 2014 when she converted them into a 220 General Lines Agent License.

Colleen then went on to work for 12+ years building her family business until she felt confident enough to put her name solely on policies. By 2016, Colleen’s father decided to retire and sell the family business. During the transition of the sale, Colleen continued to work for her parents until 2018 when they sold to Acentria. Colleen worked for the business for two years until finally deciding to leave the company and form her own insurance agency with a few business partners to create Secured Insurance Group.

As a Florida insurance company, we are serving one of the largest insurance markets in the United States. We are proud and determined to enter this market with the sole purpose of giving realistic, reliable, and well-suited insurance to our community.

We bring over twenty years of insurance industry experience so the complex world of insurance is closely familiar to us. As members of the community, we know that this complex world can be extremely overwhelming. It is why we are compelled to navigate this maze, eliminate out the fluff, and give our clients simple choices that most realistically and reliably take care of their needs.

We believe in several core principles for our agency.

Every step in the process of finding you the best insurance coverage requires exceptional service by our agents and every action they take is guided with this goal in mind.

The insurance industry is large and complex, especially here in the Sunshine State. A deep well of knowledge is required to navigate it and each of our agents has a remarkable amount of knowledge and experience to pull from when servicing your insurance needs.

As long-time members of the community, we view everyone calling in as a member of the greater Central Florida family. You can depend on us to find you realistic, serviceable, and reliable coverage that will protect those things you value most.

Every interaction with our clients by one of our agents is unique and personally important to them. Our agents are determined in achieving your wants and needs when it comes to your insurance coverage.

We take great care in making every interaction a comfortable and easy experience. We know insurance can be overwhelming but we are here as mediators, able to lay things down in simple terms. We care in finding you the coverage you need and that means helping you understand what you’ll be receiving.

These core principles guide our actions and interactions with every one of our clients. Know that we will always treat you like family  Whether it’s auto, homeowners, life, or commercial insurance we are here to help protect some of your greatest investments and secure your future.

As experienced agents with decades under our belts, we are committed to providing exceptional service and being knowledgeable, dependable, personable, and caring. Becoming the best Florida insurance company does not mean focusing on large marketing blitzes to get your attention but rather through hard work and excellent customer service. Take comfort that we always aim to provide you quality service, in a timely fashion and that you will always be treated like family here at Secured Insurance Agency!

Call Us Today
As a Central Florida auto insurance agency we are dedicated to giving our clients the best service. Committed to exceptional service, knowledge, dependable, personable, and caring. At Secured Insurance your family and we can help create an auto insurance policy that is realistic and reliable. Take comfort that we will always provide you with quality service, in a timely fashion and that you will always be treated like family here at Secured Insurance Agency!